Even as a kid, I always loved Oklahoma authors.

We didn’t buy a lot of books, but read every S.E. Hinton and Bill Wallace book at the school library. I read “A Dog Called Kitty” when I was pretty young. One of the librarians probably turned it face out, so I noticed it. Then I read the blurb about the author. Bill Wallace…from Chickasha? Chickasha, Oklahoma? That was our county seat. It was only half an hour away. And a real-live author lived there?

Didn’t get to S.E. Hinton until later – junior high or high school. Probably high school would have been the first time they would have had her books available for us. But still. Published as a teenager? From Tulsa? What?

I understand how kids like writers to be accessible on Twitter or blogs nowadays, because that’s how I felt about Wallace and Hinton. The fact that they lived in my state – saw the things I saw and knew the places I knew – made them more accessible to me…more real to me. I felt a kinship with them. I almost felt like I knew them. Reminds me of Twitter.

I think it’s unfortunate that I missed so many other Oklahoma authors, and I’m sure there’s more. I’m trying to find them all now.

I like to think that my librarian would have pointed me to Anna Myers, had she been published then. Her first book came out in 1992, the year I graduated from high school. I apparently missed its release.

I met Anna this year. She’s the regional head of the Oklahoma Society of Children’s Book Writers and Illustrators (SCBWI), and she’s fantastic. I liked her so much, in fact, that I sought out her books. She’s had nineteen (19!) published.

I started with her first, Red-Dirt Jessie. I enjoyed it, so I picked up the next one, Rosie’s Tiger. That one was good too. They were both middle grade, which really isn’t my favorite genre, but they were well-written and had good ideas and storylines.

And then I was in the library the other day, looking at the YA section for something new, and her books caught my eye. (They’re on the top row in my library, and I don’t even remember seeing them before!) Assassin looked good. I grabbed it, and a couple others, and checked out. Went home and cracked it open. 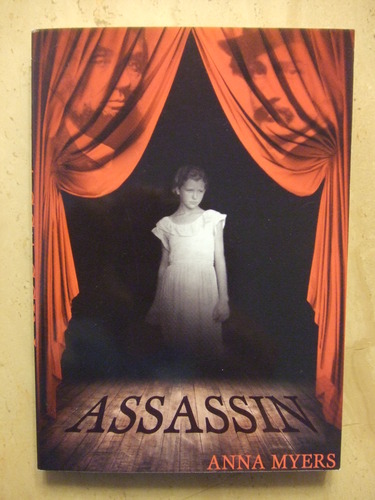 So good. So very good.

Assassin tells the story of Bella, a young girl who finds herself between John Wilkes Booth and Abraham Lincoln. The handsome, charismatic Booth uses her to help him with his plot to kidnap Lincoln. Even though Bella knows what’s she’s doing is wrong, she helps Booth anyway, endangering the president and causing her to lose the trust of the boy who’s always loved her.

This is spot-on good historical fiction. I read every word and sped through the book. I haven’t read a lot of YA historical fiction, but you can bet I’m going to keep reading these! I also recommended it to my 13-year-old daughter. I know she’s going to enjoy this story too – and even learn a little more about the time period to boot, like I did.

I’ve moved on to Time of the Witches, and it is proving to be as mysterious and exciting as Assassin.

Now I can’t help thinking of what else I’m missing.

I wish the library would have a list of all the books by Oklahoma authors. Full Circle Bookstore in OKC does a pretty good job of identifying books by local writers, but it would be nice if the library would do it too. I know that reading a book by someone from my state meant a lot to me as a kid (and now). I imagine there are other young men and women who would feel inspired and encouraged by these writers, just like me.

Do you have any ideas on how to raise awareness of local authors and their work?