Last week I found another book by Oklahoma author Darleen Bailey Beard. I had never read The Babbs Switch Story and had no idea what it was about. The Babbs Switch Story is fiction, but is set amid the real story of the town of Babbs Switch, Oklahoma.

I consider myself kind of a Oklahoma history buff, but I did not recognize Babbs Switch as the community where a tragic fire burned a schoolhouse and killed 35 people in 1924. I also feel like I should have at least realized Babbs Switch was a town name, based on the train car and tracks on the cover. The Sooner Switch is near my town, and I know that is a place that was used as a train switchyard. I didn’t connect the dots, however, and thought that the book must be about a girl named Babbs Switch.

The book is actually about a girl named Ruth. The book opens with the death of a kitten, killed by her mentally disabled sister Daphne. Daphne doesn’t mean to kill the kitten – she loves soft things, and she doesn’t understand that squeezing them tight can hurt them.

When Daphne almost hurts a neighbor’s baby, the girls’ parents decide that Ruth shouldn’t sing at the Christmas Eve celebration at the schoolhouse – to protect both girls from accusations from the other townspeople. Ruth is angry. She sings the big solo each year at the celebration, and her “daffy” sister is ruining it for her.

This leads up to the fire that destroyed the schoolhouse and took the lives of thirty-five people. Before the sun rises on Christmas morning, Ruth realizes what is truly important. 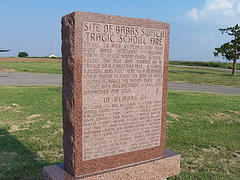 Marker at the site of the fire

I liked this book. Like I said before, Oklahoma history is one of my big things, and I had heard about this story. I know the site is near the Wichita Mountains, and for some reason, I think we might have gone there at one time and seen the monument there. But…I have a terrible memory for someone who likes history so much. I’d like to go see the monument next time we’re over that way, just in case I’m just dreaming that I was there.

This book had a lot of difficult themes – from the death of the little kitten at the beginning to the horror of the fire and aftermath. I think some children might not be ready for this subject matter, even if it was at their reading level, but it would be a good book for a classroom of students studying Oklahoma history. It really brought the event to life.

On another personal note, I was surprised when another of the kittens was named Nutmeg. I thought I was being so creative when I suggested that name for my daughter’s cat.

And, even more of a shock was the name of Ruth’s friend’s big sister. LeNora. That’s my daughter’s name (except we don’t capitalize the N.) When I ran across that name in the story, I flipped to the copyright date – 2002. My daughter was born about two years before…and I personally know Darleen Bailey Beard. She used to live in the same town as us, and we went to the same small church. They moved away years ago, and we haven’t been in contact until recently.

I don’t know this for a fact, but it seems awfully coincidental that her character would have the same uncommon name as my little girl. I’m going to have to choose to believe that the inspiration for LeNora came from my daughter’s name. And I like that very much.

Of course I recommend this book! Maybe it’s not right for younger kids – especially very sensitive ones or those who might harbor excessive fear of fire. But I do think that it is a well-written book that adults and older kids will learn a lot from – both about the true fire at Babbs Switch, and about the fictional relationship between a young girl and her unconventional sister.

Great link with reprints of stories from the Oklahoman about that awful night.

2 thoughts on “The Babbs Switch Story”